The relationship between art and political conflict has been significantly reshaped by the proliferation of digital media and the internet as a means of instant dissemination of images, texts, and audiovisual expressions. Artistic /activist actions intervene via these digital means into an expanded symbolical space that is no longer the sole sanctuary of artists and art audiences, but instead has become the ‘neural fibre’ of everyday life. 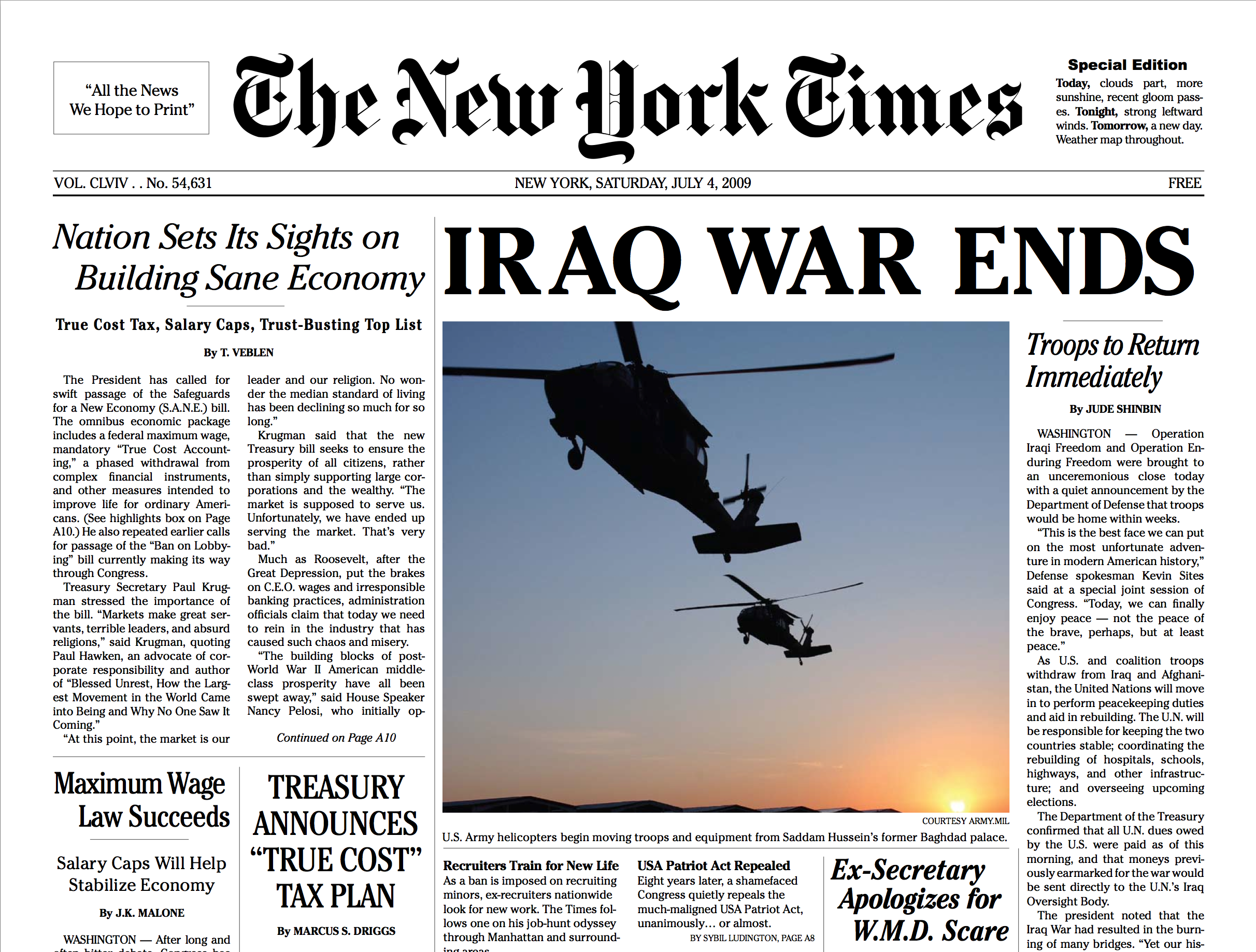 ‘Special Edition’ of the New York Times, July 4, 2009 – “Iraq War Ends”. A spoof edition by a coalition of artists and activists, distributed in print and online.

At first sight this seems to have simplified the task enormously of art that wants to intervene in daily life, not least in urgent political affairs. However, the intervention of art in political conflict has turned out anything but uncomplicated in recent years. The idea that art can address pressing social, ecological and material issues in a wider public domain to some extent presupposes a democratic context that is willing to absorb and respond to this criticism. When this context is absent, in the face of authoritarian rule, amidst tightening ideological domination, the efficacy of artistic/activist intervention is called into question, while unpredictable detrimental results of actions further complicate the situation.

Recent outpourings of artistic/activist protest for instance in Turkey and Russia seem to have amplified the tightening of authoritarian rule. The hopeful beginnings of the uprising in Syria (once dubbed the “Syrian Cyber-Revolution”, suggesting the image of a bloodless revolution) have descended into a nightmare. The rise of violent sectarian religious fundamentalist movements in the wake of the various crises in the Middle East have rendered the arts all but speechless. How can artists respond to such extreme deployments of brutal political force, and what responsibilities do they face in staging political dissent? How can art, as a predominantly secular ideology, produce a counter-weight to the ideological closures of fundamentalist religious (mass-)movements?

This public debate is organised at the occasion of the Tactical Media Connections research meeting at the Tolhuistuin, which marks the start of a public research trajectory tracing the legacies of Tactical Media and its connections to current forms of artistic / activist media practices. Tactical Media had been identified in the 1990s as an emerging practice at the intersection of art, media, political activism and technological experimentation. Tactical Media are media of crisis and opposition. Tactical Media crack open the media, cultural, and political landscape. Completely without innocence their operations are never uncontroversial or straightforward.

The debate will be staged inside the exhibition Crisis of History
( www.crisisofhistory.nl ), which presents the works of young artists from the Middle East that investigate the Modernist dream and what is left of it. The exhibition includes, inter alia, the provocative Jihadi Gangster series by Aman Mojadidi (Afghanistan), the video Children of the Left by Urok Shirhan (Iraq), and the demolition of Mecca in the installation Ground Zero by Ahmed Mater (Saudi-Arabia).

Support:
This debate is organised in collaboration with Framer Framed
( http://framerframed.nl/en/ ) and the Tolhuistuin (wwww.tolhuistuin.nl).

This entry was posted in Uncategorized. Bookmark the permalink.